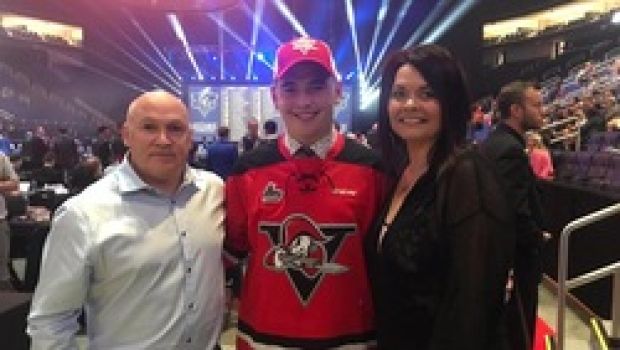 As Quebec Major Junior Hockey League players gear for a season they hope will change their lives, a goal-scoring 17-year-old New Brunswicker decided not to wait for the puck to drop before changing his.

Yanic Duplessis, an elite-level player who was drafted by the QMJHL's Drummondville Voltigeurs in 2019, revealed he is gay earlier this week.

In the hockey world, that qualifies as significant news. One of the reasons the native of Saint-Antoine, N.B., decided to step forward is to help make such announcements unremarkable.

"It was a struggle for me, and it shouldn't be," he said in an interview with CBC's Quebec A.M., later adding "it shouldn't be a big deal.&quot;

And for Duplessis, it was. He tells of anxiety attacks at school and calling his mother to pick him up; he speaks of his fear that he would be found out in what remains, in his words, "a very macho, manly sport.&quot;

After revealing the truth to his parents last year, Duplessis decided to go public in an interview with the Atlantic Canadian FDS Podcast Network on Labour Day.

The reaction to his announcement suggests he needn't have worried. The outpouring of public support was swift and considerable. It included social media messages from people in the hockey world, like former Montreal Canadiens player Guillaume Latendresse, and former NHL tough guy and current Quebec MNA Enrico Ciccone

Perhaps most touching: the reaction from his peers and teammates. And one of them in particular.

"He came home and started crying because he said 'I didn't know you were going through this alone, and you should have told us'," he said.

Though Duplessis said his dressing experiences "haven't been that bad," but allowed he did hear hurtful and occasionally hateful words. But he thinks they mostly came from a place of ignorance.

"The things that were said," he said, pausing. "If they knew I was gay I'm sure they wouldn't have said what they did.&quot;

The fact he has had to hear homophobic language in a sport that has taken such things more seriously in the past half-decade nevertheless shows hockey's enlightenment when it comes to sexual orientation (and lots of other things) isn't yet complete.

Former professional player Brock McGillis knows all about that. He came out in 2016, and was the first openly-gay pro player.

He has been in contact with Duplessis and his family for some time, and offered whatever advice and support he could through his process.

"I'm always a little hesitant when someone chooses to come out in men's hockey culture and sports culture in general, especially at a young age… because I'm worried about how they're going to be treated in the game," he said.

McGillis experienced dressing room homophobia first-hand, and half-jokes "even more so since I've become an advocate.&quot;

But he also says that each time an LGBTQ player steps forward (at least five by his count), the support they receive gets incrementally bigger.

His first feeling when he saw the support afforded to Duplessis?

"I was so happy," he said. "The biggest takeaway is: when we humanize issues for people they will more often than not step up. As we humanize, we can educate and have an impact.&quot;

McGillis said many gay hockey players are sometimes reticent to contact him directly.

"I have kids all over North America, some come through their secret, fake Instagram accounts," he said. "There's a lot of kids out there struggling with this. And it only makes sense.&quot;

But the more role models there are, the more people reach out.

Duplessis said he hopes to make it a little easier for others in his position to step forward. It's already happening; he says he's received messages from several people in the hockey world saying, in effect, "Yeah, me too.&quot;

What he didn't expect is so much public and media attention.

HockeyCircles is permanently dedicated to the memory of our founder, Jack McIlhargey, scout for Philadelphia Flyers and Vancouver Canucks Alumni.

Team Managers
Websites
Business
Ice Rinks
Coaches
Player Promotion
Help
Contact
Meet the Team
Press & About Us
HockeyCircles Articles
Plans
Store
Who's Online
© 2020 HockeyCircles Inc. All rights reserved. Your use of HockeyCircles constitutes agreement to our policies. Any trademarks and copyrights belong to their respective owners and any use does not constitute endorsement. Built with and and in Vancouver, BC.